opti – the leading trade show in Europe’s most important market 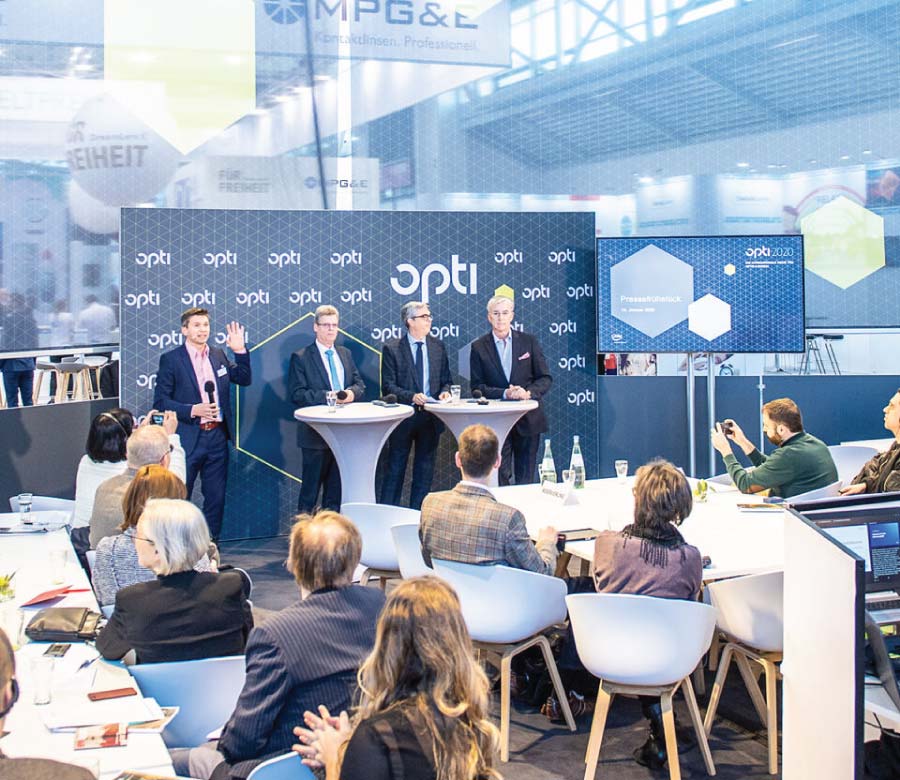 Just as the DACH (Germany, Austria, and Switzerland) region has become established as Europe’s most important region for the optical market, the leading trade show in the midst of this strong market, opti, is benefiting from the developments and has in addition to that long been tapping into international potential. The German market, in particular, plays a leading role in the optical industry and thus also for opticians and optometrists from both Germany and abroad. Right at the start of each year, opti provides a boost for the industry and contributes to its success. opti’s effect extends far beyond DACH. It has become an established meeting place for the international scene for many years.

Stable growth rates despite declining operating figures International guests are much more strongly represented at opti now than they were some years ago, after all: alongside the French market, the German-speaking market is the most important in Europe and also the most interesting for producers as a result of its stable growth rates over the years. Though the number of companies in Germany has declined slightly year on year, this is still not reflected in the relevant industry figures. On the contrary: for 2019, the German optical industry was able to record its most successful financial year in a decade, far outperforming other European markets. Total sales compared to 2018 were up by 5.4 percent at $5.15 billion U.S.(4.7 billion euros). 2019 thus exceeded all expectations and saw a continuation of the growth trend that has persisted since 2011. And opticians and optometrists have also been continuously able to look forward to a further increase in turnover, which rose to almost $7.14 billion U.S. (6.5 billion euros) in 2019, despite changes in the market that were also observed in Germany. In every one of the last few years, Germany’s central association of opticians and optometrists (Zentralverband der Augenoptiker und Optometristen für Deutschland) has been able to announce an increase in turnover of at least 2 percent, and often – as was the case in 2019 at 3.8 percent – even more. It remains to be seen how the current crisis will affect the industry. Due to its excellent starting position, there are justified hopes that DACH markets will be less affected by this crisis and its repercussions.

Good prospects for best vision care despite the crisis The vision care in the DACH region is among the best in the world. In Switzerland, in particular, the Healthcare Professions Act (GesundheitsberufeGesetz), which came into force at the start of the year, has placed the industry in a more important position in terms of healthcare. But optometric services, screenings, and preventative eye health play an increasingly important role in the markets of Germany and Austria, which are similar despite the difference in size, as well. Demographic changes and people’s growing responsibility for their own health should be able to ensure that the positive forecasts for the future, which were made before the corona crisis, continue to hold true. Although the outlook is currently somewhat bleak, many industry experts expect forecasts to remain similar in the long term to those that previously envisioned further growth. There is certainly a clear potential for this in the DACH region.

Opticians defend their place in the market Germany, Austria, and Switzerland all offer stable conditions for both industry and consumers. In contrast to, e. g., France, a slower trend towards change in the market is being observed in the DACH region. This year, the French health insurance system introduced a reimbursement for certain types of glasses, which is expected to significantly accelerate industry change and the decline in operating figures. In Germany, on the other hand, the number of employees in the industry has actually remained stable for years. At the same time, the number of people wearing glasses has risen in recent years: as of the end of 2019, according to SPECTARIS, 41.1 million people in Germany alone wore glasses, while 3.3 million people wore contact lenses. Neither is the online trade increasing at an alarming number for stationary opticians, nor is the immensely high customer satisfaction rate declining. Opticians and optometrists will continue to successfully defend their position in the market.

Advantage of the core market – effects of the corona crisis In an uncertain global environment, a strong domestic market means a competitive advantage for a trade fair – and creates at the same time confidence for the industry. Of the total of 96% opti trade visitors, 80% are from either Germany, Austria, or Switzerland. As a result, stable visitor numbers can be expected, even in view of the current challenges. While, for example, the Italian domestic B2B market has declined by 0.5 percent and 0.8 percent respectively over the last two years, and the Italian industry is continuing to strengthen its export business, domestic and foreign sales in the German market have remained in balance. The Italian industry, on the other hand, exports around 90 percent of its production, which has always been presented at opti at the start of the year. Italy ranks among the top 3 exhibitors by country every year.

Growth is expected to continue in Germany’s domestic market in the future. There is a wide variety of different needs in terms of vision, which means continued demand for both industry and opticians. The demand for refraction and screening equipment is set to continue to grow, not only in Switzerland. In Germany, the importance of optometry, as well as investments in the workshop, also continue to grow – mostly due to replacement purchases. Although confidence within the industry before the corona crisis and the positive forecasts for the optical market are likely to merely be postponed, the industry will change. We can assume that the optics industry will also reflect on nationality and regionality as an alternative concept to the global society, at least to a certain extent. In a nutshell, this is what Martin Himmelsbach, Managing Director of IPRO GmbH, has to say on the matter, a view reflected by many exhibitors: “At opti, we meet our core market: opticians from Germany, Austria, and Switzerland. As such, the trade fair is our company’s most important marketing measure. Our participation in the trade show has the aim of winning over new customers and maintaining existing contacts. Stuttgart is a fantastic city and we look forward to a great opti 2021!” 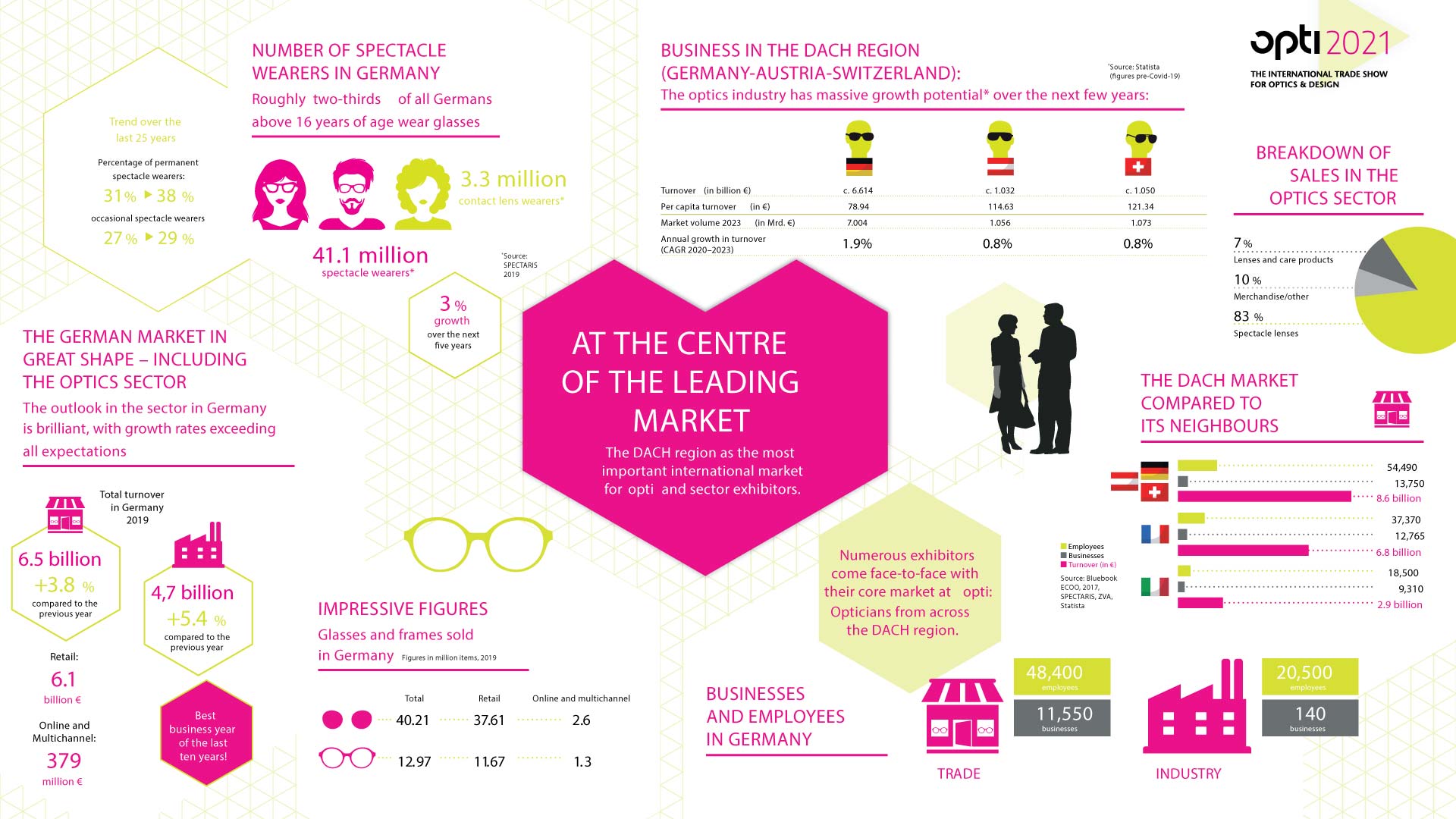 Challenges for 2021 The entire industry is currently facing an immense challenge, and opti is also faced with new conditions due to the corona crisis and the upcoming move to Stuttgart in 2021. But the essence of opti, the quality and the added value for exhibitors and visitors, will remain the same. The structure and reliability on the one hand, and the special atmosphere and offers on the other, have made opti a “meeting place among friends” for the industry, both nationally and internationally, even if this is likely to look a little different to ensure a safe stage for good business in 2021 as a result of COVID-19.

About opti opti takes place annually at the beginning of the year and alternates between Munich and Stuttgart. As the international trade show for optics & design, it presents the entire spectrum of optics ranging from frames, ophthalmic lenses, contact lenses, and low vision products to shopfitting, technical equipment, and devices. This makes opti the platform for product premieres by international market leaders and start-up companies alike. Since 2008 the trade show has been run by GHM Gesellschaft für Handwerksmessen mbH. Since then opti has shown continual growth. The trade show was held for the first time ever in 1998.

Current URL: http://www.honyatt.com/news/411.html
Previous：About Blue Light and Blue Block Lenses
Next：SILMO Is Committed To The Protection And Enhancement Of The Eyewear Industry